I was looking for people I knew.

Scanning the crowds on the wide-screen television in front of me, I squinted my eyes looking for my sister-in-law’s blue shirt; my friend’s baby. Would I spot them in the masses waiting for the Pope to arrive for mass? Maybe I could snap a picture of them snapping a picture of him on national television?

We knew several families who had taken the pilgrimage to Washington, DC, to see El Papa Francisco, the Holy Father, the Pope of the Holy See. Our brother-in-law was part of the tuxedo-clad band playing his entrance song into the Basilica. This was exciting for us — not just as Catholics, but as humans.

The excitement was everywhere; on every news station streaming live. My 6-year-old sat eagerly beside us yesterday morning as we sipped coffee and watched the President welcome Pope Francis to the White House. He sat beside us this morning as the Pope encouraged our country and its leaders in his address to Congress.

He knew this was something special; he could feel it. And so could I.

For as I was scanning the TV yesterday for familiar faces outside the Basilica, a surge of tears worked its way up from my chest and into my throat, overflowing from my eyes without any urging when the man in white appeared.

He rode through the happy, cheering crowd of thousands in his open Popemobile — so close to the people who loved him that he could easily reach out and kiss a baby (which he did). He stopped to make the sign of the cross, blessing another child who was held high in the air by the hands of his father. He smiled with his kind, wrinkled eyes as the people ran after him.

I thought — for but a moment — why am I crying? Then I knew better. Because there — in the streets surrounding the National Shrine of the Immaculate Conception on the campus of The Catholic University of America — was a living symbol of faith, hope and love. It wasn’t just the Pope himself who brought me to tears, but also the spirited crowds of the people who were there to be a part of it.

In our tabloid world, the magnetism of well-known figures can be more about celebrity and sensationalism than anything else, but the attraction of Pope Francis is very different. He is shining not for himself — but is a reflection of the light of God. He is a great man, but more importantly, he represents something much greater.

I’m wondering if perhaps John Boehner felt the same way as he worked hard to hold back his own tears during the Pope’s address to congress this morning. With a handkerchief in his hands, the Speaker of the House sat directly behind the Pontiff, his eyes were already blurry when Pope Francis said, “Dear Friends, I am most grateful for your invitation to address this Joint Session of Congress in ‘the land of the free and the home of the brave.'”

The words of Pope Francis are encouraging, but even more so is the way people are receiving them. Faith is not lost. Goodness is prevalent. It is written in the human heart to long for something greater.

How inspiring it was to see people flooding the streets not in riot, but in reverence. Gathering not in fear, but in fortitude. Joined in anticipation rather than anguish. How refreshing to see a man of great humility who has the ability to draw crowds of thousands wherever he goes (six million attended his outdoor mass in January in the Philippines) — not because of his fame, but because of his faith.

So often, I feel disheartened when tuning into the national news — but while watching this week, I’ve felt great hope.

A few days ago, I was reading a book about how to start teaching my 4-year-old daughter with Down syndrome to read. Yesterday, the lector who read the Second Reading at the nationally televised mass had Down syndrome. I was distracted by small children playing puzzles at my feet, and when I heard the familiar tone of her voice, I immediately looked up to see her.

Standing before the hushed crowds of thousands, she beautifully read the words of St. Paul. One passage specifically stood out to me:

think about these things.”

Think about these things.

For these are the things that give us hope.

Pope Francis’ namesake, St. Francis of Assisi, says, “All the darkness in the world cannot extinguish the light of a single candle.” It is true that each of us can be that light — reflecting God’s love and illuminating what is true, honorable, pure and lovely.

Tonight while watching the news I heard an audience member from the Pope’s Congressional address say, “My eyes welled up when I saw him — simply at the sense of unity he brought to the room.”

We need to avoid a common temptation nowadays: to discard whatever proves troublesome. Let us remember the Golden Rule: “Do unto others as you would have them do unto you.” This Rule points us in a clear direction. Let us treat others with the same passion and compassion with which we want to be treated. Let us seek for others the same possibilities which we seek for ourselves. Let us help others to grow, as we would like to be helped ourselves. In a word, if we want security, let us give security; if we want life, let us give life; if we want opportunities, let us provide opportunities. The yardstick we use for others will be the yardstick which time will use for us. 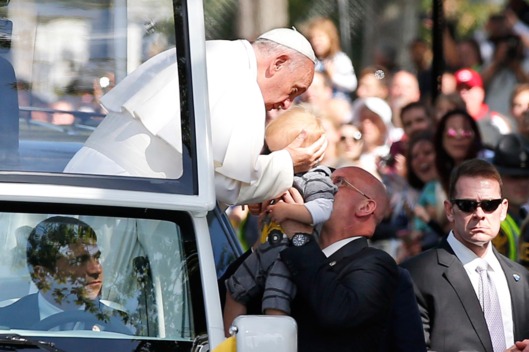